Nostalgia and The Experience Economy 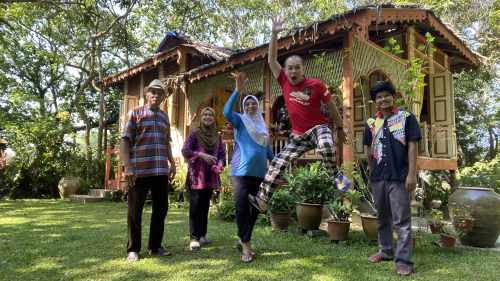 Photo: Marsila and I, together with hosts Aziz, Asiah and Azam on our last day yesterday


What makes a guest of SukaSuka Lake Retreat in Lenggong, Perak, Malaysia go and stay there 68 times?

As for me, the first reason I became first-time guest there until yesterday was to reunite with the owner, Aziz as he had been the manager who hired me into the first company I worked at. Having not met him for more than 35 years, we could reminisce.

My second reason was to experience the Malay kampung (village) setting he had created. Boy, was that nostalgic! Dinners taken seated on the floor, the assortment of Malay food that triggered my childhood memories and tongue sensations of my grandma’s and mom’s dishes and how they were prepared, the Malay house architectural design quirks, the sleeping in the mosquito net with just the fan on, the utensils and artifacts that I could have sworn were taken from my grandma’s house, and more.

As a bonus, there is the scenic lake and with choice of all the activities that can be enjoyed lakeside and on the lake! And not forgetting taking a boat ride to the other (original) part of the retreat: the island recluse.

When Aziz Manaf and Asiah Mohd Ridzuan left city life, they went "off grid living" to become Mr. and Mrs. Robinson Crusoe on this island, much to the surprise of everyone, and later started taking in guests into small chalets.

They built the lakeside (i.e. on mainland) Malay village later when it was less practical to send son Azam to school travelling from the island.

Aziz said his guest who has been there 68 times gave him feedback that the number one reason the guest comes back is the consistency!

Other guests report how they feel the authenticity of not only the setting of nature and culture, but mostly of Aziz, Asiah and Azam. I certainly felt this family of three’s heartful hospitality. After all, as Aziz said, they are merely sharing their lifestyle.

Other than those 2 lessons in superior customer experience, I notice that despite their inventory of hundreds of stories (culture, history, archeology, agriculture, etc., etc.) and lots of permutations of what guests can do, their itinerary and stories for guests are made just enough (truly customised) for the variety of guests.

Aziz says he is not staging anything. I say he is a master stager.

Of course the overseas guests (80% of their guests) get more activities and stories on Malay culture, but yet curated to not becoming overwhelming.

As an aside, I found 17-year-old Azam the son to be highly matured, confident and intelligent, thanks to the guests from 130 countries over the years whom I regard as “bringing international school to Azam” in the retreat.

For a Malay kampung boy like me, I got a dosage of nostalgia, laced with stories that appealed to my wife, Marsila and I such as the the area’s history including the 11,000 year-old “Perak Man” and the 1.8million-year-old stone axe found nearby.

For other Malaysian guests, they get varying degrees of deeper appreciation of Malay culture.

As I was about to check out from our 4 days, 3 nights stay, a few teachers walked into the retreat to verify what they had read, as they were organising a trip for their school children to come and better understand Malay culture. I think the teachers really got it.

Aziz says it is experiential tourism.

Joe Pine (co-author, The Experience Economy) and Santhakumaran Atmalingam (Founder, CX Expert Asia) will do a better job than me to unravel more than just the 3 lessons I highlighted.

Me, I wrote in their guestbook that I’ll go there 68 more times (despite there being no air conditioning and only patchy internet).

Other photos of Marsila and I there can be found at the Facebook Page of SukaSuka Lake Retreat:

I also did a Google review with 10 photos to accompany the same words as above: